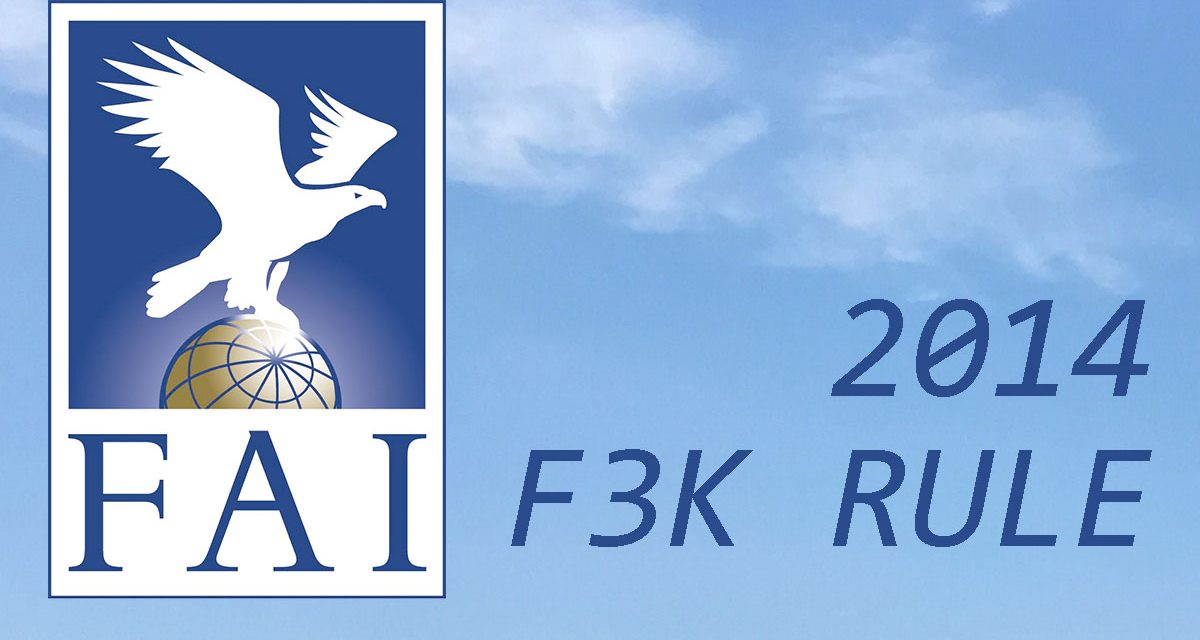 This event is a multitasking contest where RC gliders must be hand-launched and accomplish specific tasks. In principle the contest should consist of at least five rounds. The organiser may announce more rounds to be flown before the start of the contest. In certain situations (for example bad weather conditions) the jury may decide that fewer rounds than initially announced will be flown. In these cases, the number of rounds may be fewer than five and all the rounds shall be considered as the final result.

Disabled persons may ask for assistance at launching and retrieving (catching) their model glider. This start helper has to be different in every round, meaning that every start helper can only be used once. The competitor has to touch the start helper before each launch of the model glider. During a competition with only one class, competitors of less than 1.5 metres height may be assisted for launching and/or catching.

The organiser should provide a transmitter pound where all transmitters and/or antennas are kept in custody while not in use during a flight or the corresponding preparation time.

Para B3.1 of Section 4b (builder of the model airplane) is not applicable to class F3K. Any ballast must be inside the model glider and must be fixed safely.

5.7.3. Definition of the flying field

The flying field should be reasonably level and large enough to allow several model gliders to fly simultaneously. The main source of lift should not be slope lift.

In order to guarantee the highest level of safety, any contact between a flying model glider and any other person (except the competitor or start helper) either in or outside the start and landing field has to be avoided. If such contact happens during either the working or preparation time, the competitor will receive a penalty of 100 points on the total score. In addition, if the contact happens during the working time at the launch of the model glider, this will result in a zero score for the whole round.
SC4_Vol_F3_Soaring_12 Effective 1st January 2012 Page 26 Class F3K Hand Launch Gliders

In cases of mid-air collisions of two or more model gliders the competitors will not be granted re-flights nor will penalties be levied.

The contest is organised in rounds. In each round the competitors are arranged in as few groups as possible. A group must consist of at least 5 competitors. The composition of groups has to be different in each round.
The results are normalised within each group, 1000 points being the basis for the best score of the winner of the group. The result of a task is measured in seconds. The normalised scores within a group are calculated by using the following formula: normalised points = competitor’s score / best competitor’s score x 1000 5.7.9.2. Working time
The working time allocated to a competitor is defined in the task list. The start and end of the working time must be announced with a distinct acoustic signal. The first moment, at which the acoustic signal can be heard, defines the start and end of the working time.

No points are deducted for flying over the maximum flight time or past the end of the working time. Immediately after the end of the working time, or after each attempt for the task “all-up-last-down”, the 30 seconds landing window will begin. Any model gliders still airborne must now land. If a model glider lands later, then that flight will be scored with 0 points.
The organiser should announce the last ten seconds of the landing window by counting down.
5.7.9.3. Preparation time
For each round, the competitors receive at least 5 minutes preparation time. This preparation time should ideally start 3 minutes before the end of the working time of the previous group (or at the beginning of the last attempt in the task “all-up-last-down” of the previous group), in order to save time.
At the beginning of a preparation time, the organisers must call the names and/or starting numbers of the competitors flying in the next group.

After all the model gliders of the previous group have landed, the competitors flying in the next group receive at least 2 minutes of flight testing time, which is part of the preparation time. During this flight testing time the competitors are allowed to perform as many test flights inside the start and landing field as necessary for checking their radio and the neutral setting of their model gliders.
Each competitor has to ensure that he is finished in time with his test flights and is ready to start when the working time of the group begins. The last 5 seconds before the start of the working time have to be announced by the organiser.
A competitor will receive a penalty of 100 points if he starts or flies his model glider outside of the working and preparation time of his assigned group.
Competitors may test fly before the transmitter impound and after the last working time of the day.

Each competitor must fly at least 3 rounds which have to be completed in order to get a valid final score.

Detailed specifications including the tasks to be flown for the day must be announced by the organiser before the start of the contest. The tasks of the program are defined below. Depending on the weather conditions and the number of competitors, the tasks and the related working time may be reduced by a decision of the organiser as defined in the task description.

Each competitor has an unlimited number of flights, but only the last flight is taken into account to determine the final result. The maximum length of the flight is limited to 300 seconds. Any subsequent launch of the model glider in the start and landing field annuls the previous time.
Working time: min 7 minutes, max 10 minutes

Each competitor has an unlimited number of flights, but only the next to last and the last flight will be scored.
Maximum time per flight is 240 seconds for 10 minutes working time. If the number of competitors is large, the maximum flight time may be reduced to 180 seconds and 7 minutes working time.
Example: 1st flight 65 s
2nd flight 45 s
3rd flight 55 s
4th flight 85 s
Total score: 55 s + 85 s = 140 s

All competitors of a group must launch their model gliders simultaneously, within 3 seconds of the organiser’s acoustic signal. The maximum measured flight time is 180 seconds. The official timekeeper takes the individual flight time of the competitor according to 5.7.6 and 5.7.7 from the release of the model glider and not from the acoustic signal. Launching a model glider more than 3 seconds after the acoustic signal will result in a zero score for the flight.
The number of launches (3 to 5) must be announced by the organiser before the contest begins.
The preparation time between attempts is limited to 60 seconds after the 30 seconds landing window. During this time the competitor may retrieve or change his model glider or do repairs. If a competitor’s model glider lands outside the start and landing field, the competitor may change his model glider without retrieving and bringing back the one which has landed outside the start and landing field. This is an explicit exception to 5.7.2.3 and only valid for this particular Task C.
The flight times of all attempts of each competitor will be added together and will be normalised to calculate the final score for this task.
cont/…
SC4_Vol_F3_Soaring_12 Effective 1st January 2012 Page 29 Class F3K Hand Launch Gliders
No working time is necessary.
Example: Competitor A: 45+50+35 s = 130 s = 812.50 points
Competitor B: 50+50+60 s = 160 s = 1000.00points
Competitor C: 30+80+40 s = 150 s = 937.50 points

During the working time, the competitor may launch his model glider a maximum of 6 times. The maximum accounted single flight time is 180 s. The sum of the three longest flights up to the maximum of 180 s for each flight is taken for the final score.
Working time is 10 minutes.
SC4_Vol_F3_Soaring_12 Effective 1st January 2012 Page 30 Class F3K Hand Launch Gliders SC4_Vol_F3_Soaring_12 Effective 1st January 2012 Page 31

Each competitor has an unlimited number of flights. Only the best five flights will be added together. The maximum accounted single flight time is 120 seconds.
Working time is 10 minutes.

During the working time, each competitor has an unlimited number of flights. Only the best three flights will be added together. The maximum accounted single flight is 200 seconds.
Working time is 10 minutes.