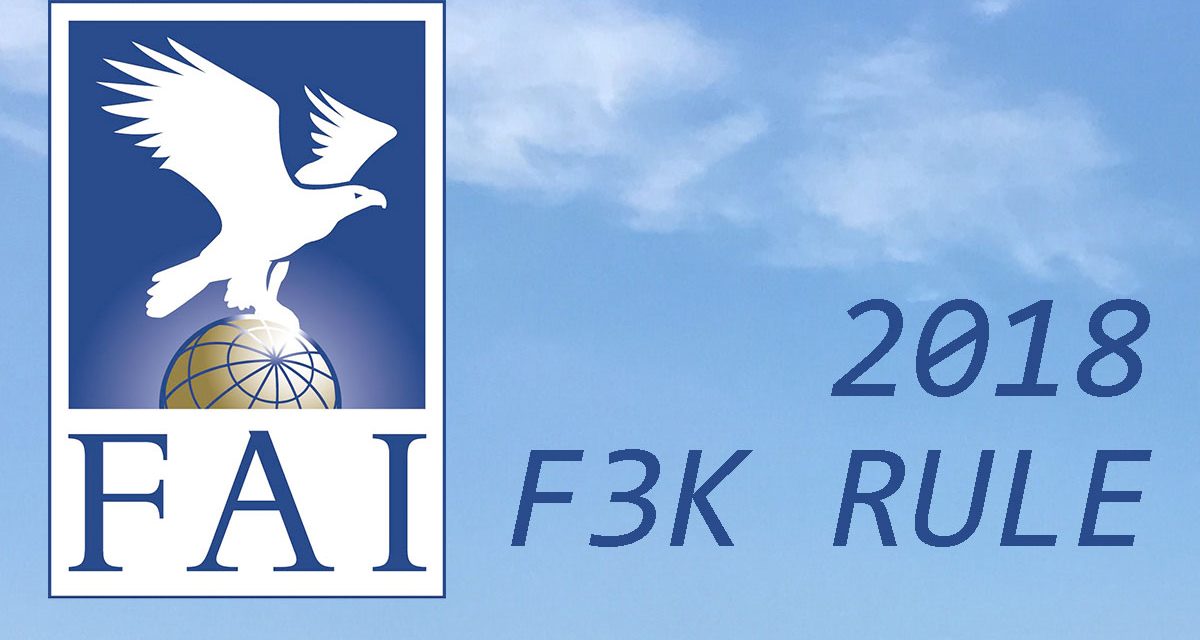 This event is a multitasking contest where the RC gliders must be hand-launched and perform specific tasks.

Official timekeepers may position themselves anywhere inside or outside the start and landing field in order to observe the flight. They must at all times ensure that they do not impede any pilot or model.

Each competitor is allowed one helper who is not allowed to become physically involved in the flight, except for retrieving the airplane, if it has landed outside the start and landing field. The helper is the only person allowed to help the competitor during his working time.

After the end of the working time the competitor and the timekeeper must sign the results of the round. If the result is not signed by the competitor, then the score for the round will be 0 points.

The organiser should consider the need for a transmitter pound with reference to Volume ABR Section 4B, B11.2 – B.11.6.

Model gliders are gliders with the following limitations:

Radius of the nose must be a minimum of 5 mm in all orientations. (See F3B nose definition for measurement technique.)

The model glider must be launched by hand and is controlled by radio equipment acting on an unlimited number of surfaces.

The use of gyros and variometers onboard the model glider is not allowed.

Para B3.1 of Section 4b (builder of the model airplane) is not applicable to class F3K. Any ballast must be inside the model glider and must be fixed safely.

5.7.3. Definition of the flying field

The flying field should be reasonably level and large enough to allow several model gliders to fly simultaneously. The main source of lift should not be slope lift.

Areas for storage and changing of spare models must be defined outside but within 2 meters of the start and landing field. About 4 square metres must be available for each competitor in a group in each area.

In order to guarantee the highest level of safety, any contact between a model glider being launched or a flying model glider and any other person (except the competitor) either in or outside the start and landing field has to be avoided. This includes contact that happens while the glider is flying or while the glider is being handled by the competitor between landing and launching.

In cases of mid-air collisions of two or more model gliders the competitors will not be granted reflights nor will penalties be levied.

In all of the above cases, if the infractions occurred as a result of a mid-air collision, no penalties will be levied, according to 5.7.4.2.

Penalties shall be listed on the score sheet of the round in which the infringement(s) occurred.

For major events the declaration of forbidden airspace should only be used as a last resort if a field cannot be found that will allow the contest site to be set out free of such constraints.

The model glider is considered to have landed (and thereby terminated its flight) if:

(a) The model glider comes to a rest anywhere.

(b) The competitor touches the airborne model glider for the first time by hand or any part of his body.

Landing is considered valid, if:

(b) The competitor touches the airborne model glider for the first time, while standing on the ground with both feet inside the starting and landing field.

The flight time is measured in full seconds. Rounding up is not applied.

The flight time is official if:

This means that if the airplane is launched before the beginning of the working time then that flight receives a zero score.

Local rules may be used only in cases of safety issues in local flying areas, but not for changing tasks.

The contest is organised in rounds. In each round the competitors are arranged in as few groups as possible. A group must consist of at least 5 competitors. The composition of groups has to be different in each round.

The organiser should announce the last ten seconds of the landing window by counting down.

At the beginning of a preparation time, the organisers must call the names and/or starting numbers of the competitors flying in the next group.

Before each flight attempt of Task C (All up) there must be an additional preparation time period of 60 seconds when flying is not allowed (see Task C description in 5.7.11.3)

Each competitor has to ensure that he is finished in time with his test flights and is ready to start when the working time of the group begins. The last 5 seconds before the start of the working time have to be announced by the organiser.

A competitor will receive a penalty of 100 points if he starts or flies his model glider outside of the testing time, working time or landing window of his assigned group.

Competitors may test fly before the transmitter impound and after the last working time of the day.

The competitor is entitled to a new working time if his attempt could not be performed correctly due to organisers fault.

The new working time is to be granted to the competitor according to the following order of priorities:

A minimum of five (5) rounds each with different tasks must be flown that the competition is valid.

The final score is the sum of the normalised scores of all rounds minus penalty points.

If five (5) or more rounds are flown then the lowest score is dropped.

The penalty points will be a deduction from the competitor’s final score and shall be listed on thescore sheet of the round in which the penalisation was applied.

The penalty points are retained even if the score of the round in which the offence occurred isdropped.

In the case of a tie, the best dropped score defines the ranking. If the tie still exists, a separate flyoff for the relevant competitors will be flown to achieve a ranking. In this case the contest director will define one task that will be flown for the tie-break fly-off.

The organiser may announce a fly-off prior to the beginning of the event. For World and Continental Championships, the fly-off is mandatory for seniors. The fly-off should consist of at least three (3) rounds with a maximum of six (6) rounds. If less then three (3) fly-off rounds can be completed, the result of the preliminary rounds determine the final ranking.

If a fly-off is flown, the points (including penalties) of the previous rounds are not considered.

To establish the ranking for international team classification, add the final individual scores of three best members of the team. Teams are ranked according to the highest numerical score to lowest. In the case of a national team tie, the team with the lower sum of place numbers, given in order from the top, wins. If still equal, the best individual placing decides.

Detailed specifications including the tasks to be flown for the day must be announced by the organiser before the start of the contest. The tasks of the program are defined below. Depending on the weather conditions and the number of competitors, the tasks and the related working time may be reduced by a decision of the organiser as defined in the task description.

Each competitor has an unlimited number of flights, but only the last flight is taken into account to determine the final result. The maximum flight time is limited to 300 seconds. Any subsequent launch of the model glider annuls the previous time.

Each competitor has an unlimited number of flights, but only the next to last and the last flight will bescored.

All competitors of a group must launch their model gliders simultaneously, within 3 seconds of the acoustic signal. The maximum measured flight time is 180 seconds.

The number of launches (3 to 5) must be announced by the organiser before the contest begins.

window. During this time the competitor may not perform test flights.

The competitor is not allowed any help during the flight testing time, working time or landing

The flight times of all attempts of each competitor will be added together and will be normalised to calculate the final score for this task.

No working time is necessary.

The next target flight is 45 seconds.

If the target is reached or exceeded, then the target time is credited and the competitor can announce the next target time, which may be lower, equal or higher, before he releases the model glider during the launch.

During the working time, the competitor may launch his model glider a maximum of 6 times. The maximum accounted single flight time is 180 s. The sum of the three longest flights up to the maximum of 180 s for each flight is taken for the final score.

Each competitor has an unlimited number of flights. Only the best five flights will be added together. The maximum accounted single flight time is 120 seconds.

During the working time, each competitor has an unlimited number of flights. He has to achieve four flights each of different target flight times duration.

During the working time, each competitor has an unlimited number of flights. Only the best three flights will be added together. The maximum accounted single flight is 200 seconds.

During the working time, each competitor has an unlimited number of flights, but only the three last flights will be scored.

Maximum time per flight is 180 seconds for 10 minutes working time.